Noise from powerful commercial and military airplanes has become a concern for both the flight personnel who work around jets and the communities near airports. However, the mechanisms that create jet noise are not well understood, so many methods are sought to study how hot flow out of the engine translates to acoustic waves. 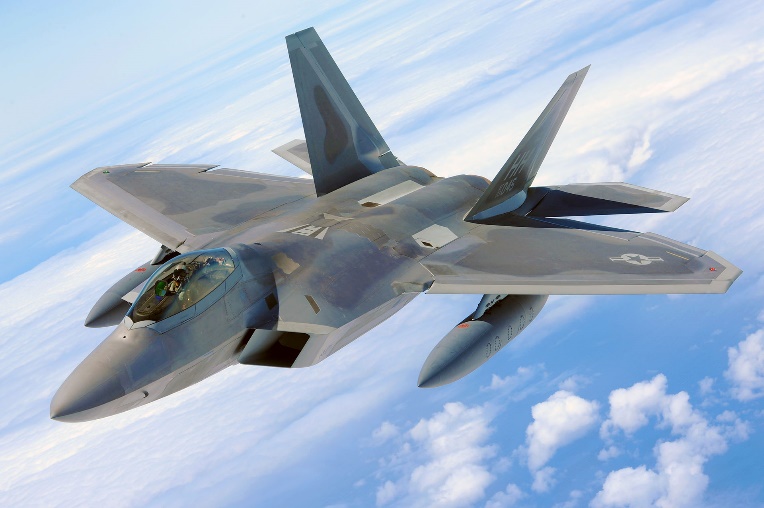 One such method is called beamforming. Using an array of microphones away from the jet exhaust, we can measure the acoustic signals at a distance, then use these measurements to reconstruct sound sources in the jet plume.

In 2009, BYU students and faculty traveled to Holloman Air Force Base and conducted one of the most extensive measurements to date on a full-scale military jet—the F-22 Raptor (See other high amplitude experiments studied at BYU). Using 150 simultaneously recording microphones, the pressure field near the jet was collected for engine conditions from idle up to full afterburner. Microphones were also repositioned at many angles to total over 5000 unique measurement locations. 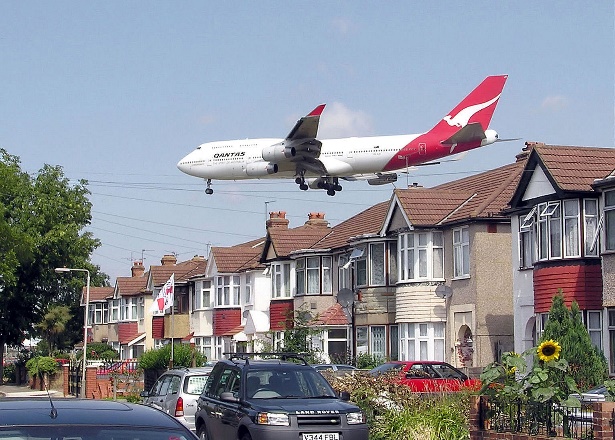 Using this dataset, BYU students and faculty use array processing to reconstruct the sources of sound in the jet plume. While similar measurements are performed on laboratory-scale models, few published full-scale measurements exist. To understand beamforming, imagine a rock dropping in a calm lake. The resultant ripples in the water from the rock travel outward towards the shore. In beamforming, we locate where the rock dropped in the water using only the propagating ripples. In essence, we record and computationally “reverse” the ripple propagation back towards the rock. This technique is commonly used in sonar, to track underwater objects, in radar, to locate airplanes, and in cell-phone towers to provide better reception to consumers.

One such beamforming result is shown here. Using an array of fifty microphones along the F-22, the sound is reconstructed at the jet centerline for multiple frequencies. At lower frequencies, the sound sources are large (spanning roughly 10 meters) and far from the nozzle (peak location at 100 Hz is about 7 meters downstream of the nozzle). At higher frequencies the jet source becomes more compact (about 1-2 meters) and approaches the nozzle exit. Some artifacts from beamforming appear at higher frequencies (like a grating lobe past 400 Hz) which can be ignored. 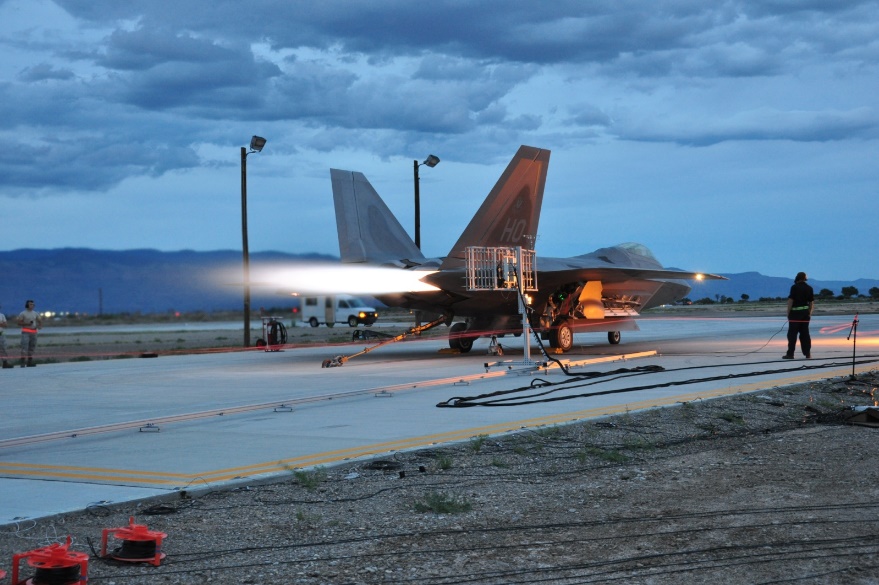 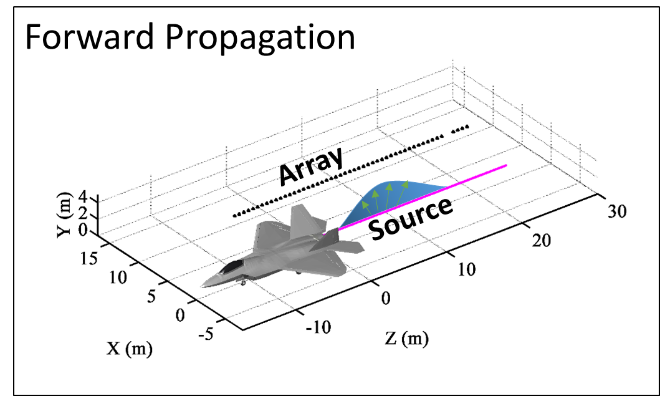 New and enhanced methods are allowing for a more detailed study of the features of the jet noise which can be used to both better understand the physical principles behind the sound generation, and to design engines which are better suited to protect personnel and improve current airway noise levels.

For more information, see our article in Acoustics Today and our recent article in AIAA. You can also see beamforming in action on cars, fans, and lab jets.

The measurements were funded by the Air Force Research Laboratory through the SBIR program and supported through a Cooperative Research and Development Agreement (CRDA) between Blue Ridge Research and Consulting, Brigham Young University, and the Air Force. Distribution A: Approved for public release; distribution unlimited. Cleared 05/14/2014; 88ABW-2014-2306. External photos are adapted from the Wikipedia commons.