Acoustics is defined as the science that deals with the production, control, transmission, reception, and effects of sound (as defined by Merriam-Webster). Many people mistakenly think that acoustics is strictly musical or architectural in nature. While acoustics does include the study of musical instruments and architectural spaces, it also covers a vast range of topics, including: noise control, SONAR for submarine navigation, ultrasounds for medical imaging, thermoacoustic refrigeration, seismology, bioacoustics, and electroacoustic communication. Below is the so called "Lindsay's Wheel of Acoustics", created by R. Bruce Lindsey in J. Acoust. Soc. Am. V. 36, p. 2242 (1964). This wheel describes the scope of acoustics starting from the four broad fields of Earth Sciences, Engineering, Life Sciences, and the Arts. The outer circle lists the various disciplines one may study to prepare for a career in acoustics. The inner circle lists the fields within acoustics that the various disciplines naturally lead to. 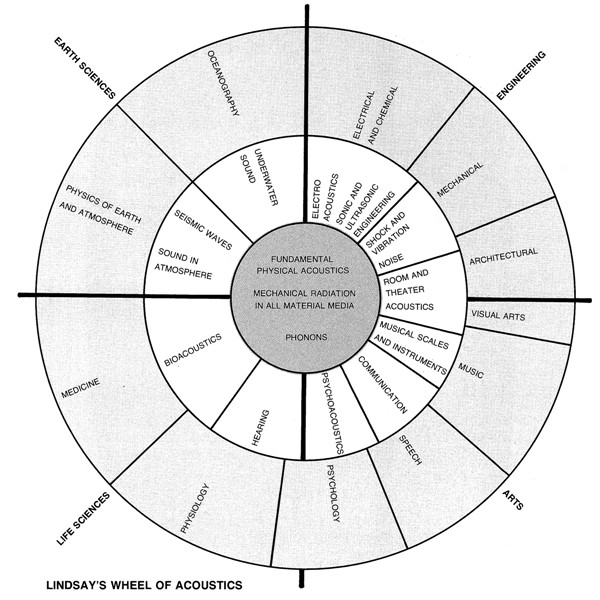 Curiously enough, Lindsey (himself a physicist) didn't list physics specifically in the outer circle. This is likely because a background in physics provides one with the foundational knowledge necessary to study nearly any of the fields of acoustics research. In fact, the Acoustical Society of America (ASA) (founded in 1929) was one of the five original societies that helped in the formation of the American Institute of Physics in 1931. The ASA is composed of 13 main areas of study called Technical Committees (TCs):

Throughout the United States, programs of study in acoustics are distributed evenly between Physics and Engineering Departments (excluding studies in the TCs of AO, AB, PP, and SC). Within the Acoustics Research Group (ARG) at BYU, students work on research and publish papers within the areas of study represented by the TC's of AA, EA, MU, NS, PA, SP, and SA. See the Research resources on this site for more info on specific projects being worked on within the BYU ARG. BYU's ARG maintains active participation in the ASA by sending many students to most semiannual meetings, having students involved in the ASA Student Council, organizing and chairing sessions at the ASA meetings, and by having our own Student Chapter of the ASA here at BYU.

A study of acoustics leads one to job opportunities in three main categories: academia (working as a professor, etc.), industry, and laboratory positions. Academic positions in acoustics are not plentiful in the United States (some examples of acoustics programs, besides ours at BYU, include

but the supply of those qualified and interested in academic acoustics positions is limited. There are many industries that have the need for an acoustician. Many large companies that conduct research will often have an acoustician to study the acoustics and vibrations of the systems/products that the company develops, maintains, or studies. Industrial positions are where most BYU ARG graduates find employment. Finally, the third main job category for acousticians is in research positions in laboratories (often government labs). Some of the labs that have acousticians include the Naval Research Laboratory, the Los Alamos National Laboratory, and the Lawrence Livermore National Laboratory.

To get involved in acoustics research at BYU within the ARG, come to our weekly research meetings to learn about active areas of research. Often students working on research will ask for volunteer assistance to help conduct a certain step of their research. This may be as simple as holding something while a measurement is taken, or it may involve spending a day setting up microphones for a field test of rocket noise. Students may request to meet with one or more ARG professors to discuss their interests in research and find an available topic of research that the student may end up doing for their thesis or capstone work. Research helps students to prepare for professional careers by giving them hands on experience. It also provides opportunities for the student to learn the skill of technical writing, a skill needed in nearly all available career options of a technical nature.